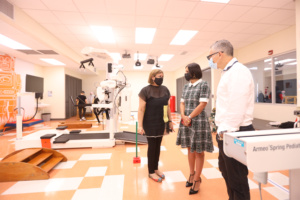 January 13, 2021, San Juan, PR — The designated Secretary of the Department of the Family, Carmen Ana González-Magaz, toured the facilities of SER de Puerto Rico this morning. During her tour, the secretary – accompanied by Ms. Nilda Morales, president and main official executive of the institution and Gustavo Arango, director of the Board of Directors of SER- was able to observe first-hand the work that is carried out on a daily basis in favor of the population of people with disabilities and autism.

“One of the priorities that the designated secretary has emphasized the most is her interest in ensuring the well-being and protection of children, as well as heads of families and older adults. Similarly, the mission of SER de Puerto Rico includes ensuring the well-being of these sectors, as well as their inclusion and integration into society. In addition, during our meeting, after the tour, it became clear that we share the same vision of working hard to meet the needs of the population of people with disabilities and/or the diagnosis of autism," Morales said.

During the tour, the designated secretary also had the opportunity to share and talk with the institution's staff, directors and doctors who offered her detailed information on the work carried out there through the different programs, including those that carry to the community with the aim of educating for prevention. 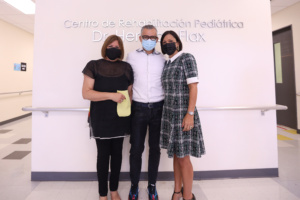 For her part, the designated secretary stated: “I am impressed with the exceptional work carried out by SER de Puerto Rico and with the commitment shown by the entire work team. This visit has served to join forces with the Third Sector, so that, together, we can offer services to vulnerable populations quickly and effectively. I hope that this visit is a first step to create alliances between the Department of the Family and SER of Puerto Rico, as well as with many other non-profit organizations.”

SER de Puerto Rico is an organization focused in provide services  to people with disabilities Y the diagnosis  from autism so that they have an equal opportunity to live, learn, work and play in their communities.

Its mission is to provide exceptional medical, therapeutic and educational services to people with disabilities so that they can develop their full potential.